It was the end of a long week at the beginning of the October fall season change. I received a call from one of the employees that I serve. He was nervous and concerned that his grandfather was having a heart catheterization so I headed over to the hospital to pray for him. The thing is, since being in the medical field for so long prior to my calling, I took the stance that it was no big deal since they do this type of procedure all the time.

The procedure was postponed due to an emergency surgery that came in so everyone decided to get something to eat. I stayed to keep him company till everyone came back. This gave me some time to bond with him a bit without all of the family around.

I found out a lot about, (I’ll call him Bob) that evening. Turns out he was in the Air Force for over twenty years and spent time as a recruiter. We reminisced about our first jobs. Mine was as a huckster and Bob was as a paperboy and at one point he served over 300 papers a day. He said Wednesdays were the hardest because of all of the inserts they would add to it. Bob also serves his church by visiting those sick and in the hospital or shut-in at home.

Then the nurses came to take him down for the procedure. They said that the procedure could take up to 3 hours. His family didn’t want to wait and instead they wanted to run some needed errands and they encouraged me to go home and get a bite to eat, which I did.

Later, I received a text that the procedure was unsuccessful. Bob had some sort of problem with the anesthesia and his artery was 100% blocked so they were unable to finish the procedure. The biggest concern now was that his kidney function stopped, he had become aggressive, and combative. He was given blood thinners and his arms began to bleed from the injuries he inflicted on himself.

It is believed that they gave him something to calm him down after they put restraints on him, for his protection, as 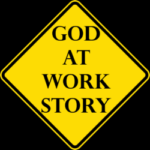 well as, the nurses and doctors. However, something went wrong and Bob became unresponsive. His oxygen was very low and his blood pressure very high and he lay in his bed for a full day only occasionally trying to rip the tubes out of his body. We prayed for hours on end and nothing happened.

The following day he was still unresponsive but not tearing at his tubes and again we prayed. By the fourth day, I was becoming familiar with the family as we shared stories while watching Bob lay almost lifeless.

That evening I went home to eat and prepare for my following rounds and I wrote a prayer. It was personal from me to him, from his wife to him, his sister, son, daughter, and his grandson to him. I included James 5:14-15 since I was planning on anointing him.

I recalled about the blood thinners and realized that myrrh doesn’t mix well with the blood thinner he was on so I decided to ask the Lord God Almighty to bless a small vile of grapeseed oil that I would apply after the prayer.

We had all been told to prepare for the worst and that it looked grim for Bob. But we had discussed the fact that we both believe in miracles.

It was as if God was just waiting to show himself off in front of 9 witnesses. I gathered all around the bed, said the prayer, and anointed him with the grapeseed oil. At that time the nurse in the room wanted everyone out of ICU except two people, so I complied and before I sat down in the waiting room, I was called back to the room. Bob had woken up and wanted to know, “what is all this fuss about? ”

Now you may say what kind of grapeseed oil is it? But I tell you that it wasn’t the grapeseed oil at all. Nor was it me saying the prayer. However, it was a sincere faith in Him whose will still does miracles today.

God is amazing and faithful! To God be the glory!

Thank you for reading this story.

Below, is the prayer that I wrote, called:

A Short Prayer for the Healing of Bob*

Lord, your Word speaks promises of healing and restoration and I thank you for the miracles you still perform today.

Today, I claim those promises over my husband, brother, father, grandfather, and friend, Bob.

We believe in the healing power of Jesus through faith and prayer. We are told: “Is anyone among you sick? Let them call the elders of the church to pray over them and anoint them with oil in the name of the Lord. And the prayer offered in faith will make the sick person well; the Lord will raise them up. If they have sinned, they will be forgiven.” ~ James 5:14-15

And I ask You to continue Your mighty work in the life of Bob. We pray that You will reach down and surround Bob with supernatural peace and strength to recover from this torment on his flesh.

We come to you and ask for peace and for ultimate healing in his life.

Father, Bob accepted you as His personal Savior, so, no matter the outcome, we know that he has been blessed by you.

We humbly ask that your will be done. And, it is in your precious Son, Jesus’ name we pray, Amen.

*(I give you permission to use this prayer and edit it for your use.)